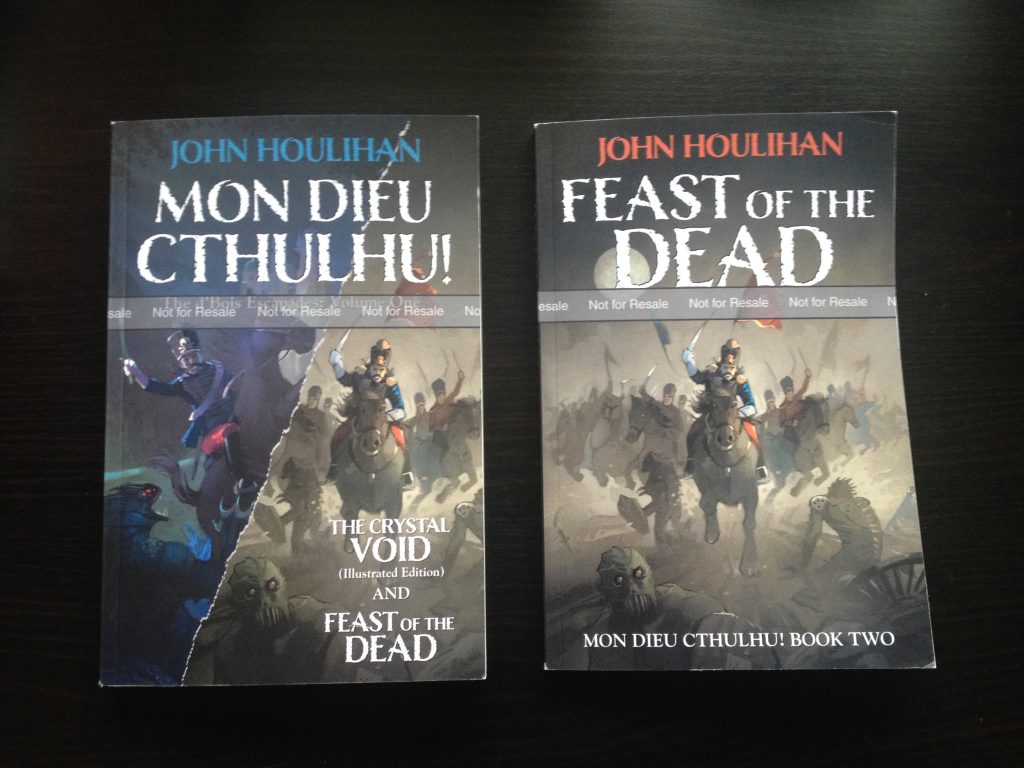 Sacre blue, what exciting times, proof copies have arrived! After a mighty long gestation period, it’s always a tremendous thrill to see the finished editions finally in your hands.

Hot off the presses are two brand new proof copies of impending books by moi, which will be shortly available in both print and ebook formats on my author page at Amazon and via Modiphus.net and DriveThruRPG.com – within the week I hope, c’est formdidable!

First up is Feast of the Dead, the newest instalment of the d’Bois Escapades thrilling pulp-Cthulhu adventures set in Napoleonic times which feature the dashing French Hussar Gaston d’Bois. Join him as he takes on his first independent command and leads a squadron of the XIIIth Death’s Head Hussar’s into unknown territory (full details below).

The rather splendid Sci-fi and Fantasy reviewer has already been kind enough to say it’s: “An epic, swashbuckling Napoleonic adventure expertly blended with chilling Lovecraftian horror”

Next up, is The d’Bois Escapades Volume 1, an anthology edition which features the complete adventures to date including: The Crystal Void (illustrated edition) plus Feast of the Dead all in one handy volume (see below).

Tremendous thanks to Dim Martin (front covers) and Richard Gale (awesome design, layout and editing) for their stupendous work in getting these ready to go.

More details as they appear, but for now, vive l’Empereur!

The d’Bois Escapades: Volume One

The Crystal Void
The year is 1810 and as Napoleon’s marshals chase Wellington’s expeditionary force to the lines of Torres Verdras, the dashing if rather dim French Hussar Gaston d’Bois is astonished to encounter the love of his life. But the fragrant Odette is soon abducted by the Marquis Da Foz, a ruthless and sadistic Portuguese noblemen.

Joined by a mysterious British Major, the hot blooded Hussar is soon in deadly pursuit, but what strange horrors lurk within the shadows of Da Foz’s ancient Moorish fortress? Can the heroic duo foil Da Foz’s dark machinations, rescue the delightful Odette and ultimately prevent the opening of the dreaded Crystal Void?

“Great story, interesting characters, lots of sword and musket action, and the potential for future stories in an underutilised setting.” – Sci-fi and Fantasy Reviewer

Feast of the Dead

Dashing French Lieutenant, Gaston d’Bois, is reassigned to the XIIIth Imperial Death’s Head Hussars and charged with leading a detachment of these “thieves on horseback” into the Spanish interior, in search of intelligence, supplies and plunder.

Forced to take refuge in the Monasterio de St Cloud, d’Bois encounters the unworldly Doctor Malfeas and the beautiful nurse, Mademoiselle Brockenhurst. Yet this former house of the holy holds many outré secrets and d’Bois faces fresh battles on all fronts, including the mystery which lies at the heart of the Monasterio itself, an ancient and terrible enigma which threatens both the lives and souls of all who encounter it.

Alone, deep behind enemy lines and beset on all sides, can d’Bois survive his first real command and prevent the horrible unravelling of the feast of the dead?